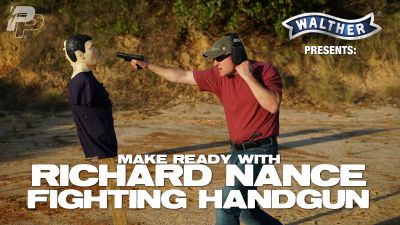 Carrying a handgun for self-defense also means being able to deploy that handgun in less than ideal scenarios. Even having to fight with it when an attacker is too close. In Fighting Handgun, Richard Nance walks you through the justification for close quarter combat skills, controlling distance, striking and fending, striking with your gun, the combat draw stroke, fowling the draw, primary and secondary target areas, shooting from retention, contact distance shooting, strike and shoot drills, and more. Richard has been a police officer for 21 years. A former SWAT Team Leader, Richard currently instructs shooting, defensive tactics, and several other tactical disciplines in addition to his current assignment as a Detective. Richard has an extensive martial arts background and holds the rank of Nidan (2nd-degree black belt) in Shudokan Karate. He is an Unarmed Combatives Instructor, certified by Kelly McCann. Richard contributes regularly to Guns & Ammo magazine and is the Self-Defense Editor for Handguns magazine. He authored the book, gunFIGHT! – An integrated approach to shooting and fighting in close quarters. If you are serious about carrying a handgun for self-defense or are in law enforcement, this is a must watch video.