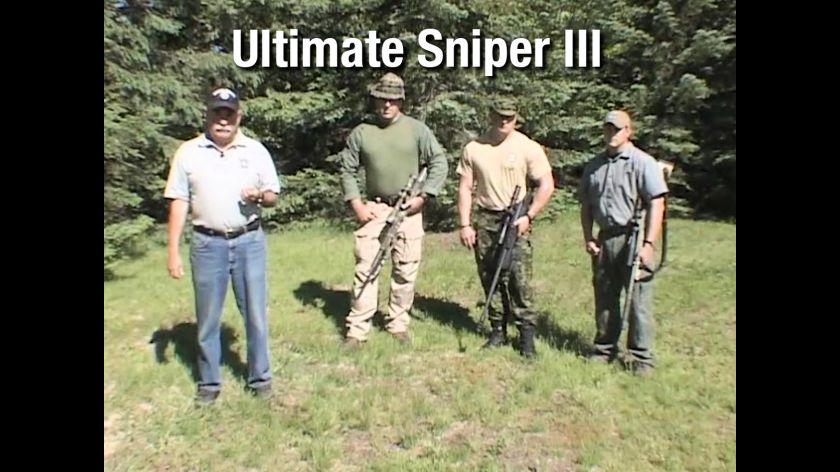 National sniping authority, John Plaster returns in this third installment of his best-selling Ultimate Sniper video series. Joining Plaster in this video are record-holding, long-range snipers, Steve Reichert, Rob Furlong and Jim Gilliland. Together with Plaster, these combat snipers show you just what it takes to win on today’s battlefields. Drawing on their extensive knowledge of current tactics and techniques used by the insurgents in Iraq and Afghanistan, these snipers reveal the skills and mindset needed to be a successful modern-day sniper, the marksmanship fundamentals and state-of-the-art equipment used by U.S. snipers, how to design and conduct practical shooting drills for long-range accuracy, the training and strategy used by enemy forces, and the very real threats faced by U.S. sniper teams everyday. Learn how the stopping power of the .50 caliber and other precision sniper rifles, combined with the astonishing skill of this newest generation of snipers has redefined how we fight and prevail against the forces of terror.

Maj. John L. Plaster USA (Ret.) served three tours in the top-secret unconventional warfare group, Studies and Observations Group, in Vietnam. As a long-range reconnaissance leader, he led tiny intelligence-gathering teams behind enemy lines in Laos and Cambodia before leaving SOG in late 1971. He was decorated for heroism four times and retired from the U.S. Army as a major.

Rob Furlong, a former Canadian soldier, held the world record for the longest .50-caliber sniper kill. While on Operation Anaconda in Afghanistan in 2002, he was credited with dispatching a Taliban fighter at 2,700 yards or 1 1/2 miles. A veteran of Canada’s Princess Patricia Light Infantry Regiment, today Rob is a police officer in Edmonton, Alberta.

Sergeant First Class Jim Gilliland, U.S. Army, is credited with the longest conventional sniper rifle (7.62mm) kill in the Iraq conflict, having eliminated an insurgent sniper at a confirmed distance of 1,367 yards. A qualified Airborne-Ranger, Jim and his “Shadow Sniper Team” were featured in a USA Today article in which the team was credited with more than 200 kills. A career soldier, Gilliland was an instructor at the U.S. Army Ranger School and is now the NCOIC at the Soldier Requirement Division, Small Arms Branch.

Steve Reichert, a former U.S. Marine sniper, is credited with the longest confirmed kill during Operation Iraqi Freedom. Steve spent eight years with the Marine Corps, serving as an infantryman, infantry platoon commander and platoon sergeant, precision weapons instructor and Marine diplomatic security guard and detachment commander, and was the driving force in implementing the DARPA countersniper and XM rifle programs in the Marine Corps. After leaving the Corps, Steve founded Long Range Services, Tier 1 Group (T1G) and High Caliber Training (HTC). T1G is a defense-related company that provides specialized services and training to the U.S. government and other agencies.

Ultimate Sniper III is a must have for any serious student of sniping or military combat.

For information purposes only.

Be the first to review “Ultimate Sniper III: The Video” Cancel reply